These two well known Chinese cities are about 400 kms apart but are the dominant cities in this western part of China. They share a lot in common in culture food and customs but there is a healthy rivalry as well.

Although I lived in Congqing I made several short trips to Chengdu as did many of my work colleagues. You can go by plane, bus or train. I would recommend the train. When I first went it was a 4 hour journey, now the new fast trains do the journey in two hours.

Another way is by car. Some friends of mine hired a car and driver for a weekend trip to Chengdu – so that is a possibility too.

Chongqing was my home and I didn’t like Chengdu the first time I saw it as the train rolled in through the suburbs to the Chengdu railway station.

Chongqing is situated in a geographically interesting area – between two giant rivers (Yangtze and Jialing) and surrounded by nice mountains. In contrast, Chengdu seemed bland and flat. It took me a couple of visits to discover Chengdu and its delights, and after that I was a convert.

And Chengdu seems well setup for tourists. Jinli Street is like Chiquiko in Chongqing but cleaner, bigger and it has several good bars and restaurants. And of course there are the world famous Pandas at the Panda Research station on the outskirts of Chengdu.

The shopping center (equivalent of Jiefangbei) is around Zongfu Street which has a very nice shopping mall and there are several markets nearby.

The Chengdu People’s Park is a delight. Observe local residents dancing, singing, flying kites or other activities in this green oasis in the middle of the city. 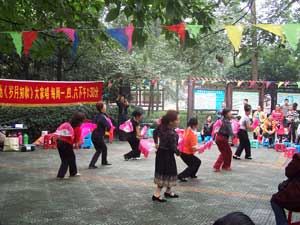 But the beauty about Chengdu is that there are a several very interesting one or two day trips from Chengdu. Leshan with its Giant Buddha is an excellent day trip as is the ancient irrigation system at Duijiangyan or the sacred Buddhist Mountain at Mt Emei and there are others as well.

So if you are living in Chongqing, I suggest you take some time and get to know Chengdu as well. I think you will not be disappointed.

Find out more about Chengdu here.