I have been fortunate to participate in the Chinese New Year  with my Chinese friends in Chongqing.

The Chinese New Year activities are significant, exciting and joyous but there is also an element of risk and danger.

The brilliant fireworks are exciting to watchbut be careful. Firworks are let off anywhere in any direction. Mix in a lot of alcohol consumption and anything can be happen. 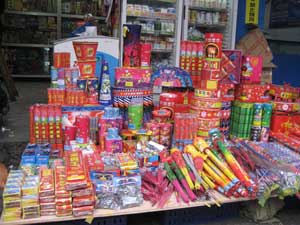 Exercise common sense and you will be okay.

I have been to New Year’s Celebrations in the UK and Australia, and whilst very good, they do not compare to the passion and participation by the Chinese in their Chinese New Year celebrations.

The history of the Chinese New Year is a long one over many thousands of years.

The villagers tried to placate the monster by giving it food.

One time the monster seemed to be scared away by the colour red and some exploding fireworks – so the villagers started to hang red lanterns to scare it away and let off fireworks.

So today you will see an abundance of red lanterns and other decorations at the Chinese New Year as well as numerous fireworks.

The Chinese New Year occurs between January 21 and February 20 according to the Western Gregorian Calendar.

In the Chinese calendar, the Chinese New Year occurs on the second new moon after the winter solstice (when the sun is lowest in the sky). The Chinese regard this as the start of spring so it is often called the “Spring Festival”.

Many Chinese New Year activities have been done for many years.

Most important is the family reunion where family and relatives get together to eat and celebrate and enjoy each other’s company. I was fortunate enough to be invited to a Chinese New Year celebration with a Chinese family. It was a boisterous noisy evening with lots of food and drink. Also the number of relatives! Parents, grandparents, uncles, aunties, cousins – they were all there. They all seemed to live close to each other in the housing estate.

Although the family reunion tradition is old, it has lead to a new phenomena in modern times.

The modernization of China has lead to a mass movement, particularly of younger people, to cities from rural areas for work.

At the Chinese New Year, all these people go home to celebrate with their families. The result is one of the biggest annual migration of peoples in the world.

I have seen queues of people a kilometer long at the Chongqing railway station waiting patiently in freezing cold weather to get onto a train to go home for the Chinese New Year.

Another tradition is the giving of gifts in red envelopes (red for good luck) by family members (parents, aunties, uncles, grand parents) to children, whether they are young or adults.

In the west we give presents at Christmas.

The Chinese give money which is placed in the red envelope. The Chinese then pool the money to buy a more expensive gift.

If you want to give a gift at the Chinese New Year, give a red envelope with money inside. (but not an amount which is a multiple of four because four is an unlucky number!).

Another tradition is to thoroughly clean the family home. It is supposed to bring good luck for the year to come.

Chinese New Year activities can be summarized by the following – family get togethers, large amounts of food and even larger amounts of alcohol AND a ridiculous amount of fireworks.

Chinese fireworks are characteristic of the Chinese New Year. It seemed like everybody had to have fireworks. Many shops started selling fireworks. Other people sold fireworks as well. For example, I was playing pool at an outside bar area in Chongqing. The owner wanted to sell me some fireworks. She lead me through her house (kitchen and lounge) to the bedroom. She pulled out an amazing array of fireworks from under the bed – all for sale.

The Chinese New Year eve in Chongqing reminded me of a war zone!

There was a continuous barrage of fireworks from 6pm to well after midnight.

It was not controlled like in Western cities such as Sydney. In Chongqing, anybody and everybody let off fireworks. In Chongqing, this means several millions of people. There is a tremendous continual noise. There is a dense plume of smoke over the city. And if you are outside, you will end up being covered in black powder.

If you are in Chongqing during the Chinese New Year, you can’t but help join in. If you are in the public squares you will find plenty of people to celebrate with. The staff in the Chongqing bar I was in were only too happy to join in letting off fireworks.

However do be careful! Fireworks are fired upwards – but also sideways and down from apartment buildings. I know the Chongqing fire brigade were quite busy during the Chinese New Year period when I was there.

There are so many Chinese New Year activities happening. Another activity is the “office” theatre production.

There is a lot of preparation and excitement. Singing and dancing routines are rehearsed and costumes made. It really is quite a show!

It is not easy in some ways.

It is cold and crowded, particularly on the transport systems.

But that is more than compensated by the joy and deep meaning of the celebrations for the Chinese.

AND join in the Chinese New Year Activities!

Chongqing is an exciting place to be during the Chinese New Year!