Chongqing is a famous city with a long history and a brilliant culture. There are many ancient ruins, ancient tombs, ancient buildings, grottoes, and temples, and tens of thousands of collections of cultural relics.

Bayu Culture is one of the special ethnic cultures along the upper reaches of Yangtze River. The origin of Bayu Culture came from Ba culture. Ba people lived and fought in the mountains and river valleys. Living in this tough environment these people developed a tenacious character for which they are famous even today.

Ancient Ba people were good at singing and dancing and many of thier dances developed while they were fighting battles.  Gradually this kind of dance became  popular in the court of the Emperors and until the Han dynasty, Bayu dance was one of the required court dances at banquets. It was group dancing which was rough and vigorous and changed continuously. 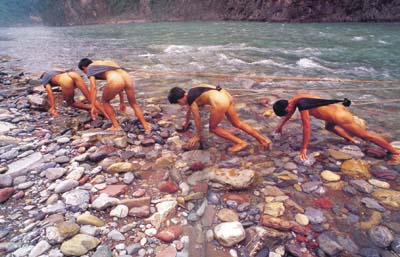 Along the Yangtze River from Chongqing to Wushan the river is often narrow with many reefs and dangerous shoals. In those days boats could only be pushed or pulled upriver through the rapids and currents. It was very hard work with from 10 to 100 men tracking the boats as they strained against the currents. As they strained they sang in rhythm with their movements which developed into the ‘working song’ called ‘Haozi’ lead by the leading tracker.

The Daxi Culture in eastern Chongqing and the Tongliang Culture in western Chongqing are representative of the cultures of the Old Stone Age and the New Stone Age in central and west China. The fossils and stone articles of the Wushan Ape Man of more than 2 million years ago, unearthed from the ruins of Longgupo in Wushan, are of great value for the study of the origins of mankind.

Chongqing is proud of its rich folklore and culture represented by the dragon dance in Tongliang, the lantern shows in Xiushan, the drums and gongs of the Tujia people, the folk songs sung in the fields during and after work in Mudong, and the traditional musical instruments in Jielong.

Chongqing has many folk arts well-known to the world. 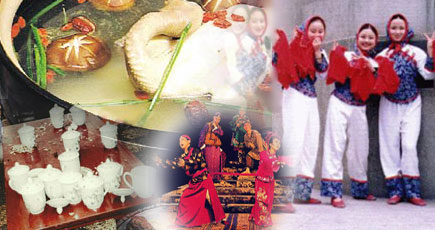 The main ethic groups in Chongqing are:

The Chongqing native speak the dialect of Southern Mandarin Chinese.

Most people there are straightforward, enthusiastic, humorous and generous.

Many elders in Chongqing are likely to watch the Sichuan opera.

With numerous of sports facilities and parks, the major activities in Chongqing are sports and recreation.

Women in Chongqing like to gather and exercise the Yangge dance and Yaogo dance on the open ground around town. This has turned out to be an interesting  street scene in Chongqing.

Teahouses of various of styles can be seen everywhere in Chongqing. It is one of the best place for people get together, dating or just to relax after work.