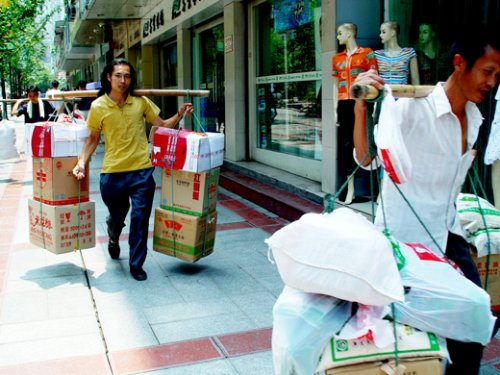 Yu Gang, a 32-year-old migrant farmer worker in southwest China’s Chongqing Municipality, has been in a good mood these days, for the mayor of Chongqing had called for citizens not to discriminate against migrants but show them respect.

Yu has been working as a porter, called “Bang Bang” in the local dialect, for over a decade in the mountain city of Chongqing. “Bang Bang,” a somewhat discriminatory term, actually refers to the pole that a porter uses to carry things for local people.

The “Army of Bang Bang”,  which comes from rural areas, can be seen almost everywhere in Chongqing. When a local resident cannot carry his or her heavy belongings in street, he or she just needs to cry for “Bang Bang,” then a “Bang Bang” will come on for business.

As a “Bang Bang,” Yu said he does not care about how tiring, hard and dirty the job is. He is most afraid of “being looked down upon”.